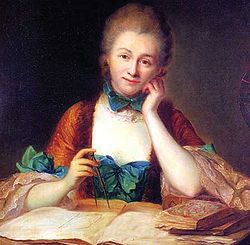 Émilie du Châtelet, famous for being Voltaire’s mistress, was actually a talented scientist and intellectual in her own right. Overcoming challenges that kept women from becoming scientists at the time, she educated herself and carried out experiments in physics, and completed a translation and commentary on Newton’s Principia.

Gabrielle Émilie le Tonnelier de Breteuil (later Émilie du Châtelet), was born December 17, 1706 in Paris. Her father, Louis Nicolas le Tonnelier de Breteuil, was a high ranking official of the court of Louis XIV. The de Breteuil family was part of French aristocratic society, and as such they entertained often. Distinguished scientists and mathematicians were frequent visitors to the household.

Educated at home, the young Émilie learned to speak six languages by the time she was twelve, and had lessons in fencing and other sports. Even from a young age she was fascinated most by science and math, much to her mother’s displeasure. Such interests were not viewed as proper for young ladies, and her mother even threatened to send her away to a convent. Fortunately, her father recognized her intelligence and encouraged her interests, arranging for her to discuss astronomy with prominent scientists he knew.

Émilie also had a flair for gambling, applying her talent at mathematics to give herself an advantage. She used her winnings to buy books and laboratory equipment for her scientific investigations.

When she reached age 18, she knew she had to get married, and she accepted the proposal of Marquis Florent-Claude du Châtelet, a distinguished army officer. This was a convenient arrangement for Émilie, because Châtelet was often away from home, leaving her free to indulge her interests in studying math and science on her own.

She was also free to carry on an affair with the writer Voltaire, one of the few men who appreciated her intelligence and encouraged her scientific pursuits. Émilie du Châtelet and Voltaire renovated Châtelet’s large estate house in the countryside. The house included several rooms for scientific equipment and space for experiments, and a large library holding over 20,000 books, more than many universities at the time.

Although she was frustrated at being excluded from scientific society and education because she was a woman, she was able to learn mathematics and science from several renowned scholars, including Pierre-Louis Maupertuis and Samuel Konig, by inviting them to her house.

In 1737, after several months of conducting research in secret, she entered a contest sponsored by the French Academy of Sciences on the nature of light, heat and fire, submitting her paper Dissertation sur la nature et la propagation du feu. In it she suggested that different colors of light carried different heating power and anticipated the existence of what is now known as infrared radiation. She did not win the contest, but her paper was published and was positively received by the scientific community.

She also developed a strong interest in the work of Isaac Newton, which was somewhat controversial at the time in France, where Cartesian philosophy was favored over Newton’s ideas. Émilie and Voltaire jointly wrote a book, Elements of Newton’s Philosophy, which explained Newton’s astronomy and optics in a clear manner for a wide French readership. Only Voltaire’s name appeared on the book, but he acknowledged her important role.

Émilie also worked on another manuscript, Foundations of Physics, in which she considered the philosophical basis of science and tried to integrate the conflicting Newtonian, Cartesian, and Leibnizian views.

One of her most important contributions to science was her elucidation of the concepts of energy and energy conservation. Following experiments done earlier by Willem ‘s Gravesande, she dropped heavy lead balls into a bed of clay. She showed that the balls that hit the clay with twice the velocity penetrated four times as deep into the clay; those with three times the velocity reached a depth nine times greater. This suggested that energy is proportional to mv2, not mv, as Newton had suggested.

While conducting her scientific work, Émilie du Châtelet still carried out her duties as a mother to her three children and as a hostess for her many visitors so she was always busy, and had little time for sleep.

At age 42 Émilie du Châtelet discovered she was pregnant. At that time, a pregnancy at such an old age was extremely dangerous. Knowing she would likely die, she began working 18 hours a day to complete her biggest project, a French translation of Newton’s Principia, before she died.

With determined effort, she achieved her goal of finishing the manuscript just before she died in September 1749. The complete work was published ten years later, when the return of Halley’s Comet brought about a renewed interest in Newtonian mechanics.

Émilie du Châtelet’s book was for many years the only available translation of Newton’s Principia into French, and the translation and insightful commentary probably helped advance science in France. Nonetheless, Émilie du Châtelet herself was largely forgotten by history (or remembered mainly as Voltaire’s mistress) and only recently have her scientific achievements been brought to light.